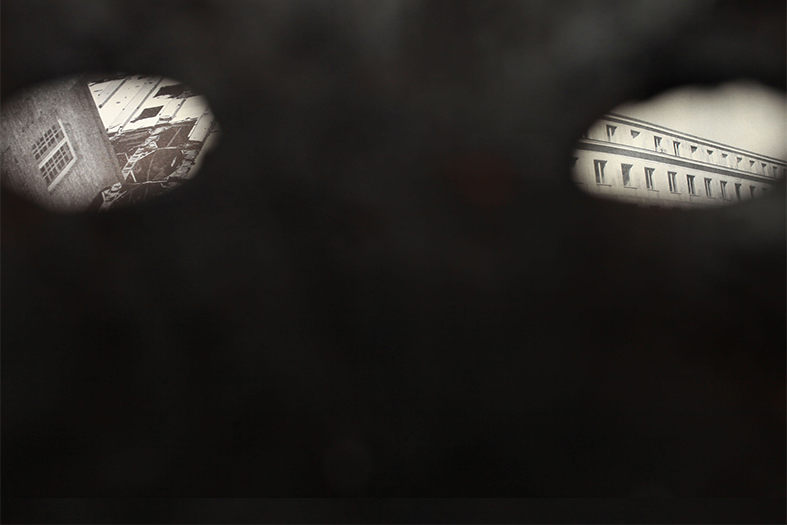 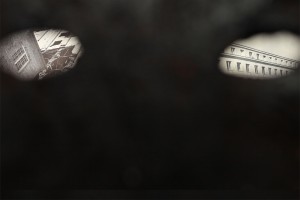 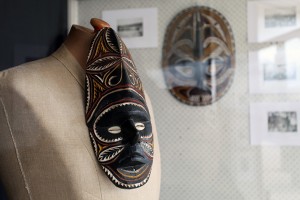 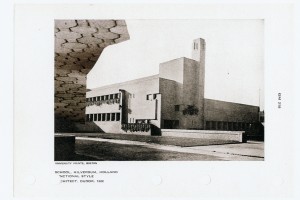 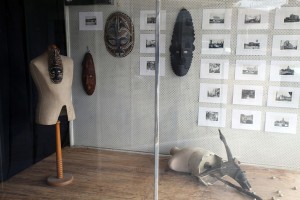 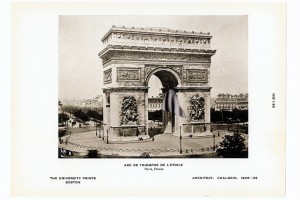 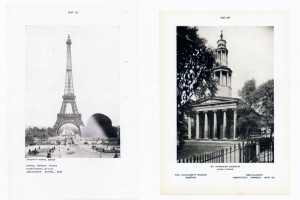 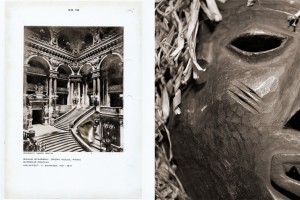 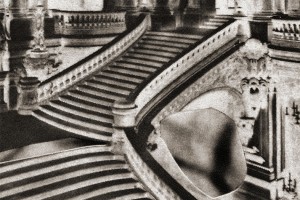 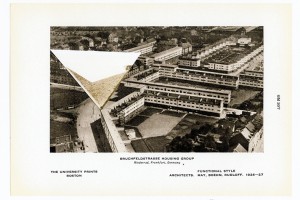 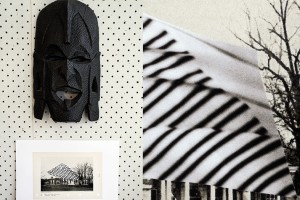 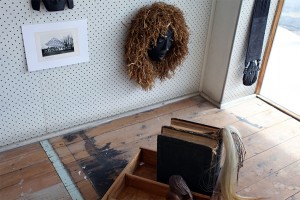 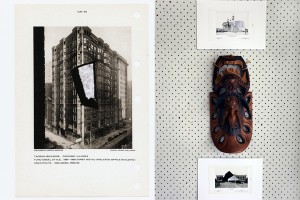 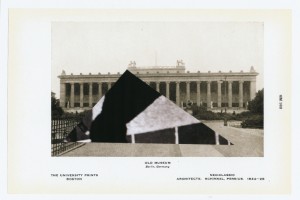 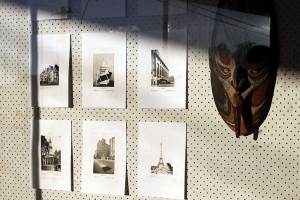 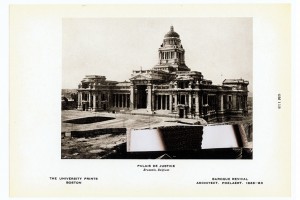 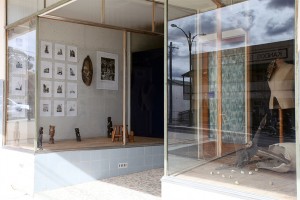 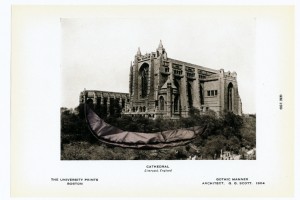 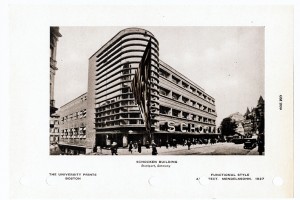 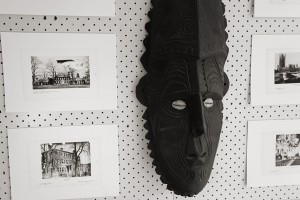 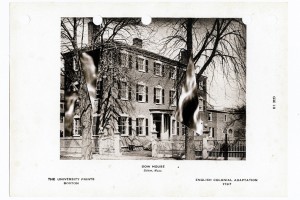 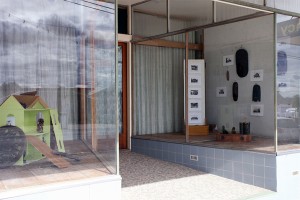 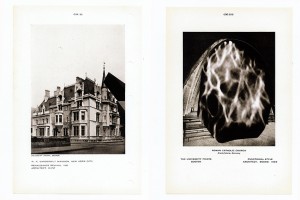 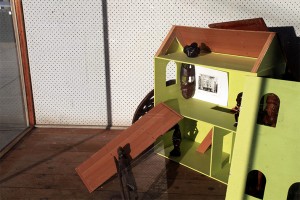 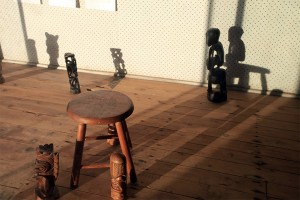 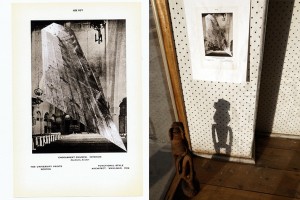 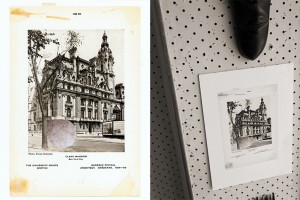 Iwanczak has set up the Kandos shopfronts to engage with real estate display, exhibiting a series of images which mimick the size and scale of property as advertised for sale. Of course, none of it is for sale. All are images of famous public buildings sourced from around the world, including the Paris Opera and the Eiffel Tower and all belong to an important photography collection held in Boston University. These images not only document architectural structures, as photographed from the late nineteenth century to mid twentieth century, but are also part of the history of photography itself from the early days of the medium. Look closer and you will see that the images have been doctored with the addition of strange, floating shapes which look like they could be anamorphic, in the vein of Holbien’s famous distorted shape hovering in the foreground of his portrait of The Ambassadors.

Iwanczak is drawing on this trope of anamorphosis as representative of the repressed underside of the consciousness, as in Lacanian psychoanalysis. If ever there was to be a real estate project for Surrealists – and who better to undertake it than Andre Breton, mastermind of the Surrealist manifesto – would it look like this? How would Surrealism, with its stake in the unconscious, represent architecture if not through an uncanny disturbance of anxiety that underpins ‘civilisation’? It is no accident that Iwanczak has included some famous public structures, tourists attractors that define a city, alongside stolid buildings symbolic of the various eras of architectural and modernist industrial progress. The bricks and mortar Arch de Triomph, dating from Napoleon’s time in 1836, is subjected to the same floating anamorphic underside as the steel frame of the Eiffel Tower, an architectural novelty when it was first unveiled at the 1889 World’s Fair.

Within each structure anxiety hovers, an indeterminate form of disturbance. Breton, in his January 27, 1925 Manifesto of Surrealism made the following points 5 and 6: “5. We make no claim to change the mores of mankind, but we intend to show the fragility of thought, and on what shifting foundations, what caverns we have built our trembling houses. 6. We hurl this formal warning to Society; Beware of your deviations and faux-pas, we shall not miss a single one.”

Iwanczak creates a series or slips, or disturbances, the equivalent of a slip of the unconscious, the Freudian faux pas, as revelatory of the fragility of thought and civilisation. Underneath the veneer of the solid foundations of monumental and respected civil buildings are the ‘caverns’ of our unconscious fears. Iwanczak has a set visualizations of this trembling, like Holbein’s deathshead, into the architectural fabric symbolic of the psychic stability of the socius.

Invoking Breton, imagining how Breton would figure Surrealism’s revolt in the contemporary mania for real estate, Iwanczak further unsettles the rational mind with the direct recall of many of Surrealism’s major tropes – the shopfront dummy, the bird nest and quail eggs, the fractured house – trains of association and disjunction familiar in Surrealist film like Rene Clair’s Entr-acte (1924), Bunuel and Dali’s Un Chien Andalou (1929) or Dali’s famous dream sequence in Hitchcock’s Spellbound (1945).

She also extends Surrealism’s fascination with psychic energy, exhibiting her anamorphic architectures inside a collection of masks and statues sourced from Oceania and Africa. This recalls Picasso’s fascination with Dogan culture in his intitial experiments with Cubism, fracturing the picture plane to reveal interior psychic states. The African mask was not about creating likenesses as in the European portrait tradition but about projecting energies, forces, and spiritual manifestations, in short, temporarily visualizing the invisible. Maya Deren in Meshes of an Afternoon (1943) deployed a figure with a blank mask as an agent of Surrealist association, a figuration from the unconscious which, as unconscious, can never identify itself, but only provoke the desire to follow, to know, in a chain of substitutions – a flower, a knife, a key.

Iwanczak mixes up continents, values and forms in scenes of cultural clashes reminiscent of an anthropologist’s study. Sets of interests flow and cross contaminate; the bird’s nest and broken quail’s eggs add a touch of the naturalist and cross-disciplinary seepage; the drawer contains Victorian encyclopaedias and statuettes that are are more likely to be of tourist market provenance than any connection with the sacred. Yet there’s a logic which holds these heterogeneous objects together – a logic of association that traverses the psychic pathways from ancient Greece and the masks of its tragedies and comedies to 1950s souvenirs of Oceania.

There’s the same rupture of rational everyday logic for the distortions and associations of dreams. The dolls house which is disproportionately small next to the carved Maori bowl adds an Alice in Wonderland twist of a topsy-turvey logic brought at the tourist shop. Baudelaire’s flaneur and Benjamin’s fascination with strolling the Paris arcades by night are likewise channeled through the shop display, in circuits of desire, whose source is deep in the unconscious. In effect, ‘civilisation’, or rather Euro-American ‘civilisation’, writ large in its architecture is revealed as riddled with channels of desire and unconscious forces, its seriousness mocked and trivialized in its reduction to the baser traits of lust inherent in shopping.

Iwanczak has no need to illustrate her point with our contemporary mania for the handbag by Prada or Gucci recently reframed with a Fascist style architectural refit of the shops of Sydney’s Centrepoint Tower. The lust to possess and colonial economic regimes already neatly coalesce in this shopfront critique.